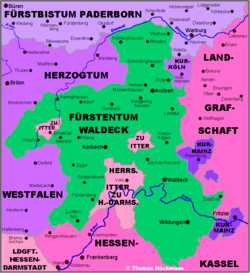 The medieval Ittergau which extended from Herzhausen located at Lake Eder to Lake Diemel developed in the 12th century into the Itter dominion, later becoming the district of Vöhl. In connection with the peace settlements of the Thirty Years’ War the 20 villages became an enclave of Hesse-Darmstadt, located between Waldeck and Hesse-Kassel. The following map shows that the dominion of Itter itself had exclaves in Waldeck which were Höringhausen, Eimelrod, Deisfeld and Hemmighausen.

The Landgraviate which later became the Grand Duchy of Hesse- Darmstadt was definitely not a state friendly towards the Jewish community as several “Judenordnungen” prove. However, they allowed Jewish families to settle possibly to improve and strengthen their economy. The Jewish community consisted of families from Vöhl but also from neighboring villages like Marienhagen, Basdorf and Oberwerba. An equally large community developed in Höringhausen and smaller ones could be found in Altenlotheim and Eimelrod. When looking at the total population of these villages one can see that about 15 to 20 percent of its population consisted of Jewish families.

The oldest written record of a Jew in Vöhl dates back to 1682. By 1705, 8 houses in Vöhl were owed by Jews and only half a century later the number of Israelis as they were often called had risen to about 140.

The inside of the main room on the occasion of a memorial ceremony on the “Reichspogromnacht” on November 9th 1938.

In 1827 the Jews from Vöhl, Marienhagen, Basdorf, and Oberwerba built a synagogue which at the time served as a school for Jewish children until 1881. The building was hidden between the surrounding houses since it wasn´t different in its appearance. From the outside the main room which extends over three floors right next to entrance on the right side and which was used for services was not visible.

Until 1881, the left part of the building was used by the teacher and his family as living quarters. This man was Salomon Bär who had a good pedagogical education and was considered honorable in the village.

In 1938 (August) probably under pressure from the state the 13 remaining Jews sold the synagogue to a Christian family which is why the building survived the “Reichspogromnacht” on November 9th 1938, Hitler´s rule and the Second World War. The main room was used as a building material store until 1974 after which it served as a drying room for laundry. Thanks to that it remained mostly untouched with its starry blue sky and the women´s gallery which goes almost all around the building. 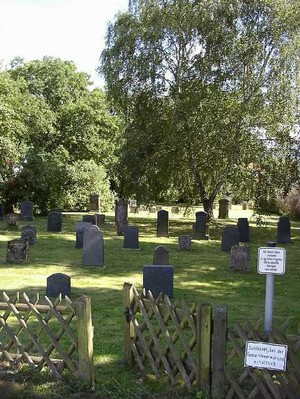 Three years after the construction of the synagogue its members sought the permission to have a Jewish cemetery at the village´s border which got granted by the community council. Before that, they were probably buried at the cemetery in Frankenau, back then about 3 hours´ walk away.

During Hitler´s rule the cemetery was vandalized twice. In 1941 the head of government in Kassel ordered the closure of all Jewish cemeteries in the then district of Frankenberg. In some places the order was not followed as promptly as in Vöhl where the cemetery was completely leveled. Gravestones where used by citizens to build their houses and by the end of the war only 45 stones were left. Those had to be put back on the cemetery by orders of the Occupying Powers. 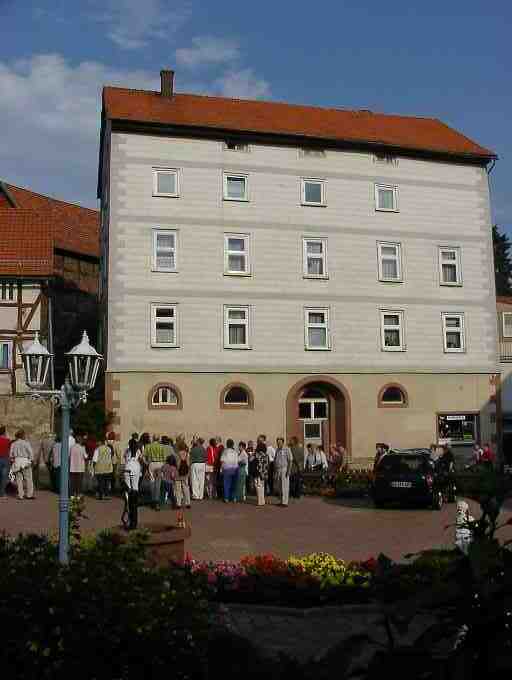 Several big houses of today’s Vöhl were built and inhabited by Jews. One of the wealthiest ones was merchant, trader, and moneylender Ascher Rothschild who in the 1830´s built a noticeable house in the center of the village. In the building was a mikvah which was probably also available for other families. After 1881 it also housed the Jewish school. He even financed the construction of the ship that was built by the protestant church and which had to be torn down around 1840 due to poor condition.

Other wealthy families were the Salbergs, the Kaisers, and the Sterns; Blumes and Katzenstein were also quite successful. Among the Jewish community, however, there was also poverty; this applied to parts of the Kugelmann and Liebmann families but especially to the Lazarus family who made their living as ragpickers.

The most common occupations were being a butcher, work at the spinning mill, as well as being merchants for different goods like fruits, cattle, and leather. Most of the Jews had just like the Christian families an agriculture on the side. In the middle of the 18th century Simon Mildenberg started to train Apprentice so that they would become carpenters.

Was there an integration?

For the longest time Jews and Christians used to live side by side but not in a combined community. That was until the beginning of the 19th century where their relationship started to improve slowly by steady. Numerous Jews were members of the villages council, some of them for 20 years, David Stern for 40 years. Many of them were also (co-) founders of multiple society’s and groups that were part of Vöhl´s community. Max Mildenberg who’s family was part of the singing society was an active sportsman and took part in the first soccer team as well as being known as a great track and field athlete. After Hitler became chancellor everything changed since they dissolved those clubs and got rid of their Jewish members, sometimes in a very unpleasant way.

Victims of the genocide

In 1933, 45 Jews still lived in Vöhl and Marienhagen. Gradually they moved away into bigger cities like Kassel and Frankfurt and emigrated into different counties. In August 1938 only 13 Jews remained: 3 men, 9 women and a 6-year-old boy. Some moved to Frankfurt others got deported to Riga, Sobibor, Majdanek and Theresienstadt in December 1941, June and as well in September 1942. 45 women, children, and men who have lived in Vöhl and its neighboring villages were killed in the extermination and concentration camps. On November 9th at the annual commemoration ceremony more than 70 names are being read out to remember not only Vöhler Jews but also their spouses and children. 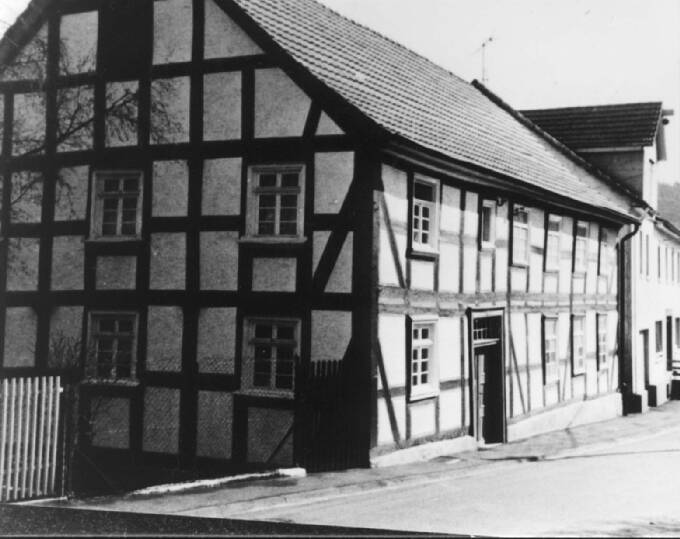 On November 9th, 1999, more than 70 citizens of the district of Vöhl founded the “Förderkreis Synagoge in Vöhl e.V.” and bought the old building to renovate it.

From the beginning and at every stage of construction events took place there: concerts, cabaret events, lectures, art exhibitions, and much more which the “Förderkreis” plans each and every year in a different yet unique way. In addition to cultural programs and its work at monument preservation it also researches about Jews in Vöhl and its region. For this reason, it was important to them to invite former Jews from Vöhl, as far as they were still alive. 15 of them visited in September 2000 and told stories about their childhood in Vöhl, the horrors they went through and the suffering they and their families experienced. They gathered in front of the synagogue´s Torah wall for a group photo. 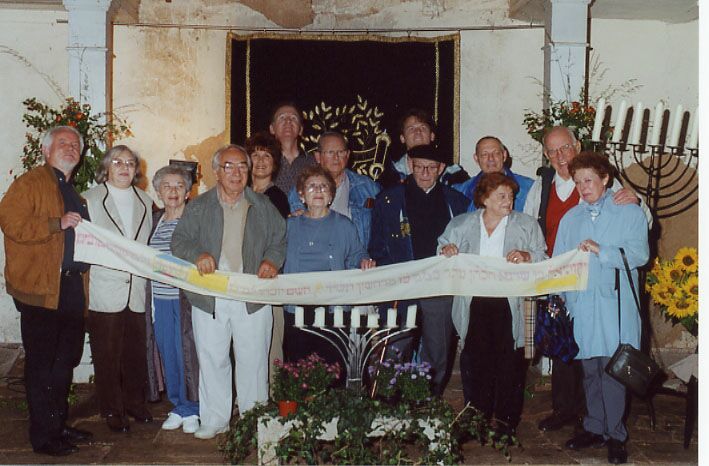 The main room has since been completed. In the former living quarters, pictures, documents, and cultural objects remind us of the time when Jews also shaped the image of our village and contributed to its development. 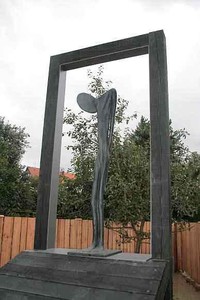 A memorial in the garden of the synagogue, created by the Frankfurt artist E. R. Nele, is an impressive reminder of all those that got deported during the Nazi regime. It is dedicated partly to the more that 700 Jews from Waldeck-Frankenberg that either got tortured and killed at home or that got deported to extermination camps and got gassed, shot, or killed between 1933 and 1945. But it also talks about Communists and Social Democrats, Sinti and Roma, Jehovah’s witnesses, homosexuals, prisoners and of cause all the Jews from other districts and counties.

The opening hours and events can be found on the website (see below). For visits outside the regular opening hours, please make an appointment in advance.