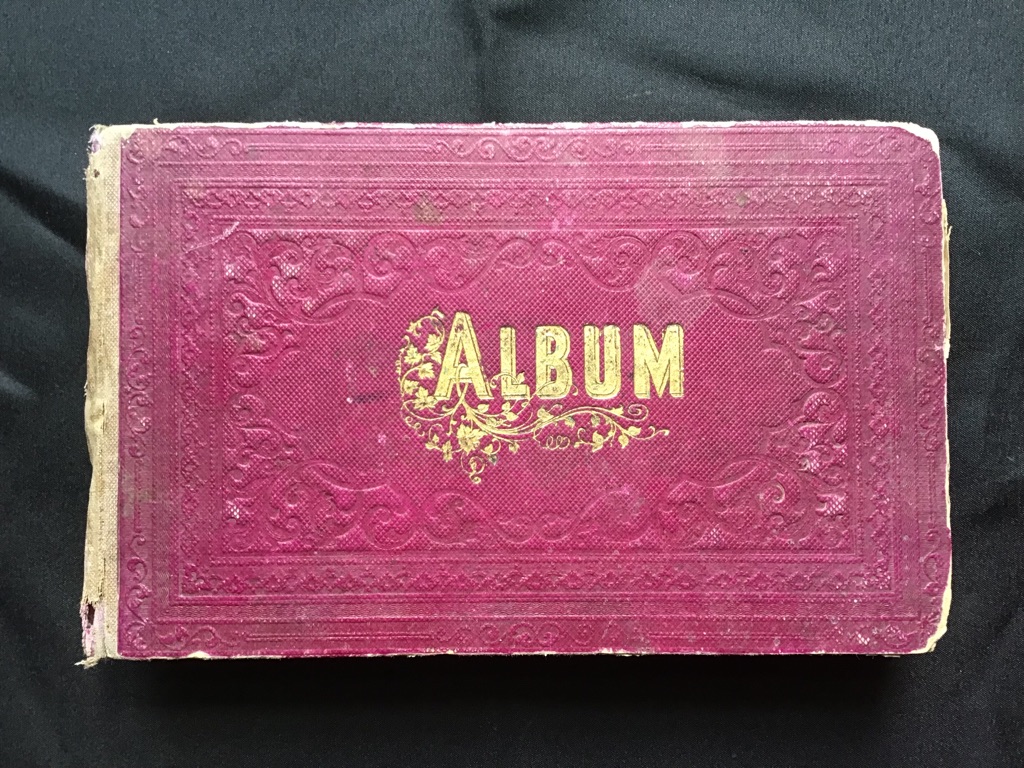 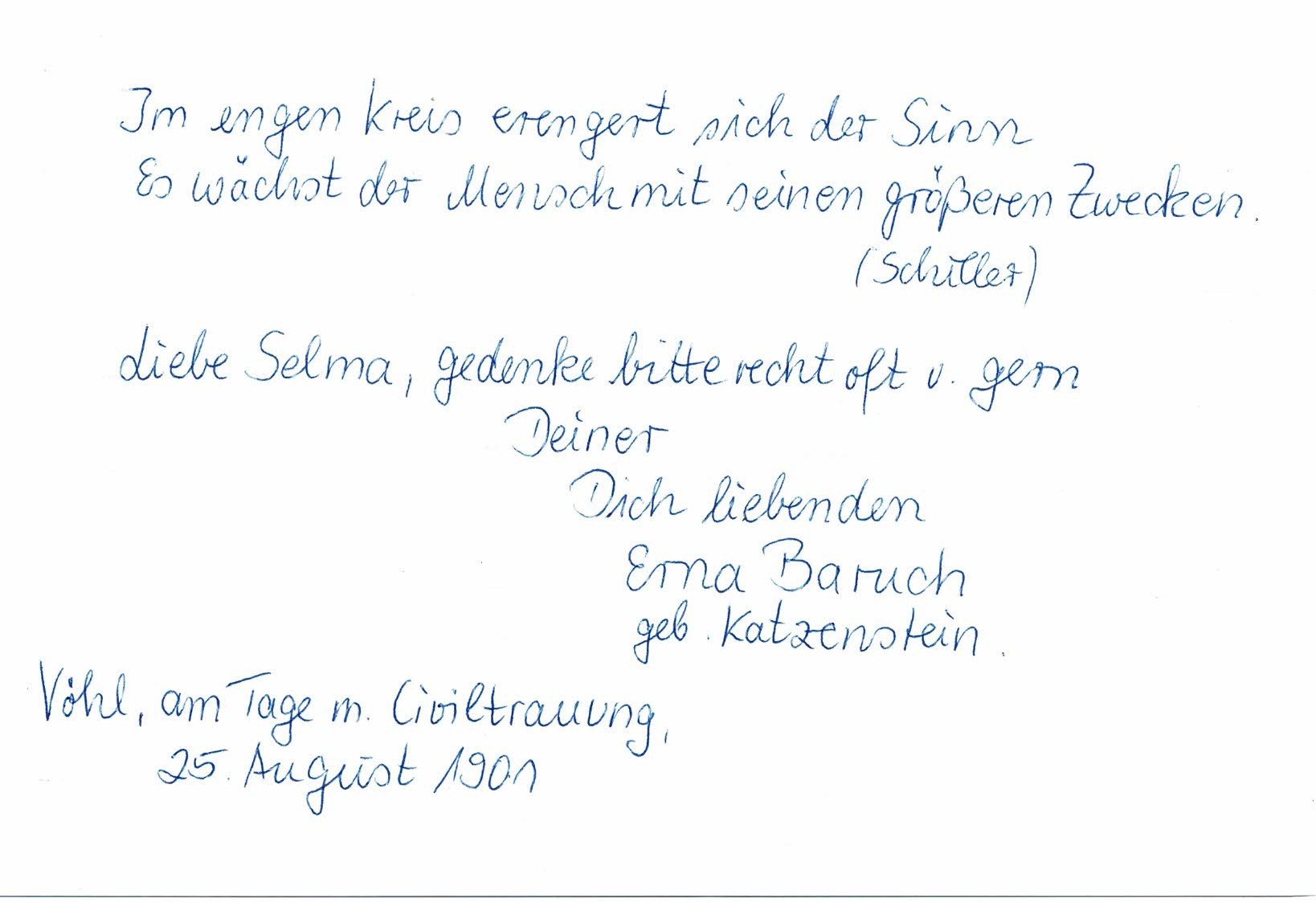 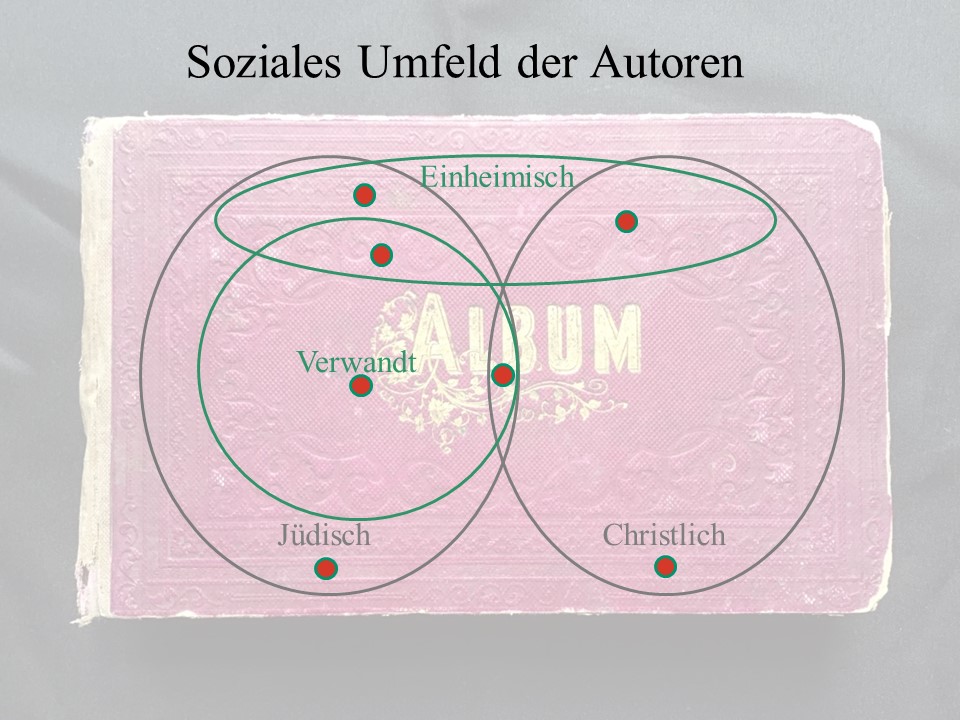 Martha Fritzler
She was living in Aachen at the time she signed Selma’s book.  Zurück

Emma Schönthal (Einheimische, Jüdin)
Schönthal_Emma.pdf
Emma Schönthal was born 30 June 1866 to Gütchen Mehler and Emanuel Schönthal.  In 1897, she purchased a house and livestock in Schulberg from Christian and Wilhelmine Finke. By 1899, she was living in Offenbach[4].  Zurück

Johanna Liebmann (Einheimische?, Jüdin)
Probably a daughter of Hermann Liebmann, oldest son of Salomon Liebmann. Hermann married 1866, and perhaps he had a daughter in the age of Selma; another possibility: the Liebmann family as well as the Bayerthal family lived in Oppenheim; a sister-in-law of Selma’s father Moritz married Heinrich Bayerthal; perhaps Selma met the Liebmann family in Oppenheim. Zurück

Regine Lieber (Verwandte, Jüdin)
A cousin of Selma; Selmas mother Karoline was the daughter of Wolf Lieber and his wife Frommet; Regine was probably the daughter of Karolines brother or sister.  Zurück

Mathilde Rothschild (Verwandte, Einheimische, Jüdin)
Rothschild_Mathilde1.pdf
Mathilde Rothschild was Selma’s sister, and was born in Vöhl 27 April 1868.  She never married, and it is believed she joined the Red Cross.  Family lore indicates she was estranged from her parents and siblings, but the reasoning is not known.  She died 26 September 1938 in Hamburg, Germany.  Zurück

Alex Bayerthal (Verwandter, Christ, als Jude angesehen)
Bayerthal_Alexander.pdf
Alexander Hugo Oskar Eduard Bayerthal was born 30 December 1867 in Oppenheim, Hesse, Germany, and was Karl’s older brother.  He married Anna Luise Claß, and they were the parents of Mathilde Wilhelmine Luise Bayerthal and Ilse Elisabeth Johanna Bayerthal.  Though born and raised Lutheran, the Nazi party identified him as a Jew.  He died at home on 21 October 1943[7].  Zurück

Hugo Bayerthal (Verwandter, Christ, als Jude angesehen)
Hugo Philipp Bayerthal was born 21 May 1872 in Sprendlingen, Mainz-Bingen, Germany, the son of Heinrich Bayerthal and Mathilde Rothschild.  He married Elisabeth Elsa Weiss (1882 – 1944) on 21 July 1905 in Frankfurt.  They were the parents of Ernst Ludwig Bayerthal.  Though raised Lutheran, the Nazi party identified Hugo as a Jew.  He was deported from Darmstadt to Theresienstadt Ghetto on Transport XVII/1 on 27 September 1942[1].  His exact date of death is not known.  Hugo was Selma’s 1st cousin.[a]  Zurück

Paula Bayerthal (Verwandte, Christin, als Judin angesehen)
Paula Judith Auguste Bayerthal was born in Oppenheim, Hesse, Germany on 4 June 1869, the only daughter of Heinrich Bayerthal and Mathilde Rothschild.  She married Oskar August Knublauch on 9 September 1895 in Mainz.  Despite being raised as, and identifying as, a Lutheran, the Nazi party identified her as a Jew.  She was sent to Theresienstadt, arriving there on 27 September 1942, and was murdered.  She and her brother Hugo were on the same transport[1].  Her exact death date is not known.  The fate of her husband is also unknown.  Paula was Selma’s 1st cousin.[b]  Zurück


Johanna Lenneberg  (Verwandte, Jüdin)
Lenneberg_Adelheid.pdf
Johanna Magdalena Lenneberg was born 7 July 1862 in Mainz, Germany.  She was the oldest child of Julius Isaac Lenneberg and Adelheid Rothschild, who was the daughter of Ascher Rothschild and Blümchen Sternberg.  The last known record of her is a census showing her with her parents and her younger siblings, Alfred, Klara, and Paul.  I do not have the date of this census[8]. Zurück

Emma Homberger (Verwandte?, Jüdin?)
Possibly the daughter of Aaron Adolph Homberger and Therese Kaufmann.  Aaron was the younger brother of Selma's aunt, Bettie Homberger, who married Siegmund Rothschild.  Emma and Selma were not related to each other, but had mutual cousins in the form of Siegmund and Bettie's children: Sophie and Justus Rothschild.  Emma Homberger was born about 1856.  The family lived in Mannheim, Baden-Würtemberg, Germany, and her parents formed the business Homberger-Kaufmann, dealers of Spirits and Wine.  According to the Mannheim address book of 1930, Emma and her sister Anna were the agents for the business.[c]  Zurück

Willy Rothschild (Verwandter, Einheimischer, Jude)
Rothschild_Willi.pdf
Willy (or Willi) Rothschild was Selma’s brother.  He was born 12 November 1879 in Vöhl.  He was married twice.  First to Hildegard Dahl.  Together, they were the parents of Walter Rothschild.  Second to Melita Sandels, and they were the parents of Rudolf Rothschild.  About 1933 or later, following Hitler’s invasion of Spain, Willy and his family emigrated to Buenos Aires, Argentina, South America, thereby surviving the Holocaust.  Willi Rothschild passed away in Buenos Aires on 1 December 1941[11]. Both sons – Walter and Rudolf – and their wives had been guests of the Förderkreis in September 2000.  Zurück

Annie Ganslandt (Christin)
Annie (Aennie) Ganslandt was born in 1884.  She and her siblings, Walter and Herbert, were the children of Wilhelm Karl August Ganslandt and Elisabeth Hasse Ganslandt.  Annie was named after her mother’s older sister, Aennie Hasse, who was also her father’s first wife.  Aennie Hasse died 3 months after her wedding.  Annie Ganslandt  married Franz Ludwig Viktor Schütze, was the mother of Ursula and Herbert.  She later married Ernst Köpchen[12]. Zurück

Herbert Ganslandt  (Christ)
Herbert Ganslandt was born 31 October 1888.  He and his siblings, Annie and Walter, were the children of Wilhelm Karl August Ganslandt and Elisabeth Hasse Ganslandt.  He married Marianne Faubel in 1926.  He passed away 20 December 1949[13]. Zurück

Mrs. Ida Kaiser (Verwandte, Einheimische, Jüdin)
Kaiser_Ida_1873.pdf
Ferdinand Kaiser of Vöhl married twice.  I believe this to be his first wife.  Ida Stern was born 2 May 1873 in Schmallenberg, the daughter of Simon Stern and Helene Löwenstern. She married Ferdinand Kaiser, and together they were the parents of Brunhilde Kaiser and Leopold Kaiser.  She passed away in Vöhl in 1901[14].  Given that her maiden name was Stern, and that she was from Schmallenberg, I suspect the two women immediately above, Mrs. Simon Stern and Anna Stern, were her relatives.  Zurück

Paula Rothschild (Verwandte, Einheimische, Jüdin)
Schlesinger_Paula.pdf
Paula Rothschild was born 15 June 1868 in Vöhl, the daughter of Selig Rothschild and Emilia Wallach.  She and Selma were second cousins once removed.  She married Nathan Teichman in October 1890.  He passed away sometime before 1911.  She then married Julius Schlesinger in August of 1911 in Berlin.  Both Julius and Paula were murdered in the Holocaust, he on 10 June 1942 in Sachenhausen, and she on 24 September 1942 in Theresienstadt[15].  Zurück

Albert Baruch (Einheimischer, Jude)
Baruch_Albert.pdf
Albert married Erna Katzenstein on the same day he signed Selma’s book; 25 August 1901.  In 1904, he moved his family to Essen-Steele, Hesse, Germany.  According to his son Bernhard’s death record, he was still living there on 23 August 1942[16].  Zurück

Erna Katzenstein Baruch (Einheimische, Jüdin)
Baruch_Erna.pdf
She was born 2 March 1882 in Vöhl, the daughter of Samuel Katzenstein and Cäcilie Reichard.  She signed Selma’s book on 25 August 1901, which is the day she married Albert Baruch.  The lived in Vöhl for a couple of years, then moved to Essen-Steele, Hesse, Germany.  They were the parents of two sons: Bernhard and Heinz.  Erna died in Auschwitz 23 August 1942, the same day as her oldest son[17].  Zurück

Auguste Remus/Renius/Reinus ?
Auguste indicated she was from Kassel.  Zurück

Walter Ganslandt  (Christ)
Walter Ganslandt was born in 1886.  He and his siblings, Annie and Herbert, were the children of Wilhelm Karl August Ganslandt and Elisabeth Hasse Ganslandt.  The family spent many years in London, where Herr Ganslandt worked as an internationally active merchant, but returned to live in Kassel in 1898.  Elisabeth Ganslandt was a chairwoman of a local milk kitchen and the hospital kitchen, as well as Kassell section chairwoman of the Fatherland Women’s Association, which was mainly active in welfare and nursing, and in the establishment of the Red Cross hospital in Wehlheiden.  She was also one of the first six women elected to the Kassel city council in 1919.  Walter died 10 October 1914 in an internment camp in Algeria[18].  Zurück

When Selma kept the poetry album, she was probably still living in her parents' house. This was the hotel and inn "Prinz Wilhelm". Some of the people who signed up for the album may have been hotel guests.